skip to main | skip to sidebar

Well, eventually at any rate. I'm absolutely in love with London.

Hi, by the way, I'm back :) It's been a while, no? I got home last night, but needed to rest up a bit before I got the chance to let you all know the story of my adventures!

So let's see, we got into London at 9AM on the 11th. We had a very nice cabbie to 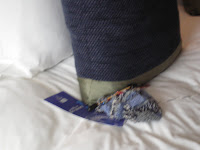 our hotel in Canary Wharf. I wasn't such a fan of the hotel, as I'm not a huge lover of modern furnishings and design, but the people there were very nice. There was one concierge, a large black man with a deep laugh, who I could see being a manipulating business man of some type, but instead he was a concierge whose sister knits and knows how to use google. (he found the same yarn store list I did, incidentally)


We went straight from the hotel to the Tower of London, which was absolutely amazing of course. Mom was fascinated by the Crown Jewels, but I was more interested in the fact that people had been walking where we were for nearly a thousand years. People had died there, raised families there. It's just fascinating to me. 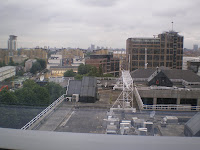 So then we were on a tour bus that took us 'round the city. 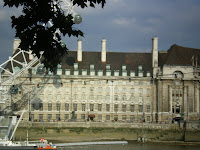 It was pretty crowded and touristy 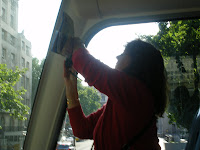 (hence the picture of my mom being touristy), but it was fun. Jet lag, unfortunately, set in though and I fell asleep on the bus, so we went back to the room early.

The next day was more touristy stuff. We went to the London Eye, and my camera batteries gave out after I got these two pictures. 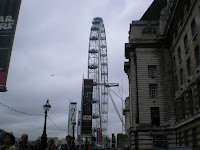 And Yoda: (there's a Star Wars exhibit nearby): 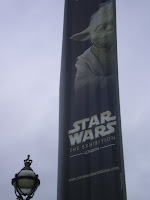 I love the Eye, even though it's purely a tourist attraction. The view melds what I love of London: You can see the historical buildings and the new ones side-by-side. Generations of people, ghosts of ancestors, all within view.

We then went to Westminster, so I could pay hommage at the graves of the greats. Chaucer, Austen and all the other authors honoured there. It's inspiring and also eerie to do that. Not to mention that it's vaguely morbid to be walking on the graves of people as you watch children sucking on cokes in the cloisters. But, I suppose, it's our generations way of learning. Still, I wish we were more respectful....


We shopped then, in the stores underground Canary Wharf. I bought shoes and a book (that will be reviewed soon, it was great).

The next day was Harry Potter and the Order of the Phoenix Day! I met up with my pen-pal Katy in front of Costa Coffee. We then began our gallivant. We hopped onto the tube and went to King's Cross: 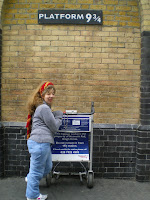 Then we went to a little area of Victorian-looking shops, which was inspiration for Diagon Alley in the films. 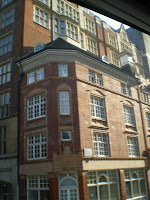 It was adorable, and we sat in a cafe for a while and just chatted before going, quite randomly, to the Museum of Natural History. (Dinosaurs are SO BIG you guyz!!!) before meeting my mom to see the film (which I loved). 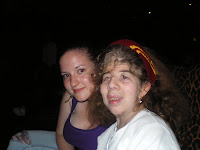 Katy and I before the film! 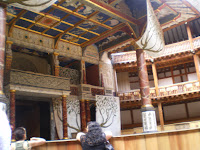 The next day was THE GLOBE. Shakespeare's Globe. It's like seeing's God's House to me. It's soooo gorgeous, and while we had our tour the musicians were practising, actors were rehearsing, the sky was blue and you could really see people crammed in there hundreds of years ago.

I had fun in the gift shop too *nods*

And then we went to Liberty. Gah. Gah. Gah. Stationary, notebooks and yarn all in one place. Heaven on Earth. I got some stationary, and some Rowan pattern books as well as sock yarn. The nice cashier called me "pet". The shop is so wonderful. When I live in London I shall frequent it often.

And then the next day it was bye to London.

But I'm in Love. The tube actually gets you places, as opposed to Atlanta public transport, and the people are nice. The old and new mix amazingly well and.... gah. Love. Love. Love.


Next up France
Posted by Chelsey at 9:45 PM No comments:

Ravelry and other things

I've spent seriously the whole day on Ravelry, but I have all of my projects and stash up there. Go check out my page!

In uploading my projects, I reliaze how many of my blog posts mention Lizard Ridge. Before too long it'll be over. Except, I'm thinking of backing it, which will take a little while, but the tutorial here is really good.

Interestingly, The Yarn Harlot's books aren't in the Ravelry database yet, which amuses me.

I must be insane, by the way. I signed up for the Ravelry Summer Camp swap. The package goes out end of August, which is after my LJ swap is over. But still. I'm nuts.

Either knitty's toe-up sock pattern in this: 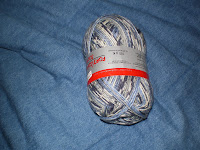 Or a headband in this: 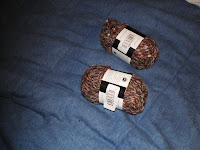 I've changed my mind on what yarn to use for Wicked, since the cashmerino is pretty warm. I'm thinking now that I'll use Malabrigo or Artyarns, even though they're not machine washable. they're just so pretty.

Anyway, packing and stuff must happen, so that's about it until I hop across the pond.

Have Ravelry Invite!!!! Must sleep. Must resist temptation..... My username is Chelseyblair.

Lizard Ridge is seamed. Will pick up edging Monday once I get new needles, going to do mitered garter stitch.

Alas Lizard Ridge is not quite an FO yet. Two large seams, edging and the final blocking need to be done. It's looking good though.

BUT! I did finish the Fingerless Mitts I started with the Debbie Bliss Cashmerino Aran I started in between LR squares ages ago. (better pictures in the daytime tomorrow) 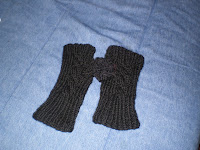 They're self-designed, and I like them. The yarn is quite warm, but that will be nice in winter/my dorm room. If I could do it again, I'd do a thumb gusset instead of the Fetching-esque thumb, because that one skews the cables. I'd also look at doing a braided cable, and use a smaller gauge for that maybe. 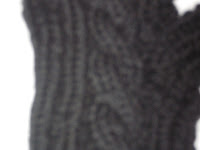 My mom really likes them, and she's been after me to make her a pair of fingerless for a while, but these ones are a little small for her.

The thing is.... she can knit. Could make herself a pair, but she's too wary of trying new techniques. It's not that she even uses the perfectly valid 'I don't have enough time' excuse. She just doesn't seem to be comfortable with new techniques. For me, this is what knitting is about. I love taking a project and learning how to do things in the pattern. It's part of the fun. And I like to teach myself, asking for help only when I've tried already.

I'm like this with pretty much everything. For instance, I just got a book I plan on using to re-teach myself how to swim. (my lessons were stalled, and thus I don't breathe or move right). I've taught myself about many historical periods and how to hypnotize, do magic tricks, and best of all, knit.

So, because I know she can do it but won't I'm hesitant to knit for her. Is this weird? Or is it the whole "give a man a fish, he eats once; teach a man to fish, he eats for the rest of his life" thing?


That's about it, knit-wise. Lizard Ridge is nearly done! Still not on Ravelry, which probably means I'll get the invite, like, the day I leave for Europe, but with my pictures on Flickr and my mom taking her laptop I can probably get set-up then anyway. :)
Posted by Chelsey at 8:58 PM 1 comment:

Blog and bookswap was mentioned on L&V

PS. have people received their books?

Let me know. I'll be in a corner seaming this afghan until I die
Posted by Chelsey at 1:06 PM 1 comment:

Chelsey
Atlanta, Georgia, United States
I'm in college. I knit, read, write and speak French. And I ramble a bit. Often about Shakespeare.